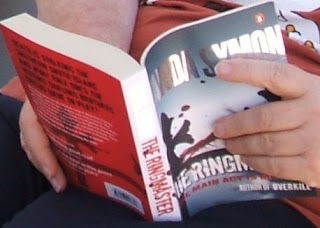 Sam Shepherd, the central character of Symon's first novel OVERKILL has moved to Dunedin, and from being in charge of a local police station to the bottom rung of detective training. She has just completed a six month trial period, and is now a detective constable. A blot on her immediate landscape though is that her boss in the current murder investigation is her old boss DI Greg Johns and neither of them trust nor like each other.

The current investigation is the murder of a young female post graduate university student, found battered and drowned in the local river. Sam chafes against the lowly jobs that Johns gives her and initiates a case breakthrough when she realises there are connections between this murder and earlier unsolved murders.

Sam's friend Maggie whom we also first met in OVERKILL has also come to Dunedin, and provides the role of support and confidante to Sam. I like the development of both their characters. I'm not sure that the final resolution of the murder that Symon comes up with isn't just a little too far fetched for my liking.

However I do think Vanda Symon is a writer to watch. There is a third novel on the way: CONTAINMENT - you'll find a short extract in the back pages of THE RINGMASTER. So here are a couple of novels to look out for: OVERKILL (2007) and THE RINGMASTER (2008). Do yourself a favour and read them in order.

Thanks for the review, Kerrie. I like the idea of someone reading my book on a cruise ship, especially if they had a wine in hand.

Out of curiousity, did the ship have a library? Beattie blogged recently about ship's libraries, and some of them looked amazing.

Yes it did have a library Vanda with lots of crime fiction on the shelves. Almost everybody seemed to be carrying a book around too.