Literature Map, is a digital ‘tourist map’ of authors based on a self-adapting artificial intelligence engine that learns from the behaviour and preferences of users of the system. Type in an author name and it will display a map of other author names, spaced relative to your original selection. The closer two names are (graphically) the higher the likelihood that you’ll enjoy reading both authors.

I played around with it a bit, but it is not very good on fledgling Australian authors like Katherine howell, P.D. Martin, and Leah Giarratano..
However I did get some reasonable results for Peter Temple, Michael Robotham, Arthur Upfield, and Agatha Christie (not that I'm claiming her as Australian)

Here is the centre of the map that resulted for Michael Robotham.

The map is saying that if you like Michael Robotham then these other writers are possible likes too.
So I clicked on Mark Billingham (I know they are great friends) and then a new map generated, with this at the centre.

Click on John Harvey and another range of authors appears. 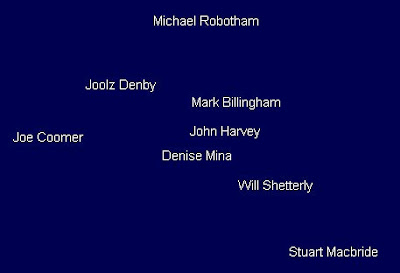 You get the idea. Unfortunately there is no tool to print out a list of the authors for you, which would be a good tool, and no connection to anything to give you a list of books, but then you can't have everything.

I recently came accross your blog and have been reading along. I thought I would leave my first comment. I dont know what to say except that I have enjoyed reading. Nice blog. I will keep visiting this blog very often.

Thanks for visiting Sarah and taking the time to comment. See you again some time.