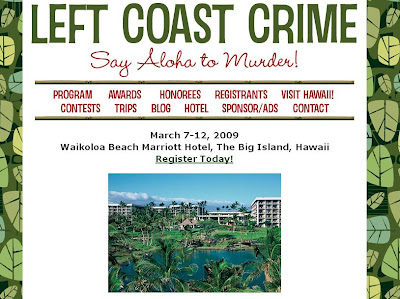 Voting closes today for 3 awards given by LCC and yesterday I managed to fit in 2 panels where the authors talked about their books and read extracts.

The award short lists are each an impressive line-up

Last night we went to a screening of Charlie Chan in Honolulu and tonight there is one of Monk, which is a series that doesn't seem to have made it on to Australian TV.

I am told by people who've been to both that LCC is more intimate than Bouchercon. Certainly there is plenty of opportunity to hear most authors speak more than once, and also times when you are able to chat informally. The sessions are well spaced too so you are not rushing from one to the other.

One thing that occurs to me though is that this is almost the perfect setting for a closed-room mystery Death at the Crime Fiction Convention. So many places where one could die: dramatically while talking on a panel, quietly in the pool or the spa, flamboyantly at the volcano etc.

Monk used to be on TV here years ago. It's probably showing on reruns somewhere.