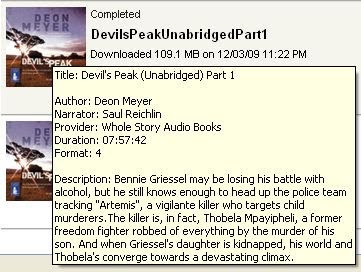 Three narrators weave a story - Bennie Griessel, a detective whose alcoholism is in danger of making him a "has been"; Thobela Mpayipheli, former KGB sniper, whose personal loss has turned him into a vigilante and has brought him to wreaking justice when the system failed him; and Christine van Rooyen, the prostitute who becomes entangled with a drug runner and small time crook who is part of an international cartel.
For much of the book Christine is telling her story to a minister, sitting in his study, unburdening herself. In the long run all three will have blood on their hands, and all three will have administered their own form of rough justice.

The narration often slides imperceptibly from Christine's story to that of Bennie or Thobela, and it comes as a surprise to the reader (or in my case the listener) that you have made that transition. In the long run I was never quite sure whose eyes I was seeing the world through.
There are some wonderfully drawn characters in this story, and the three threads are beautifully layered.
Saul Reichlin's voice (the reader) was really the only thing that reminded me that this novel was originally written in Afrikaans.

I haven't read any Deon Myer titles before, but Thobela has apparently appeared in an earlier book (HEART OF THE HUNTER), and Bennie was a minor character in DEAD BEFORE DYING. One thing is sure, I will be looking for further titles.

Thanks for this review, Kerrie : ). I haven't read this one, but Blood Safari was quite good, so I'll bet I'll like this, too.

Deon Meyer sounds good, but as it seems as if he is on the list of several global readers, I am glad I have other writers on my list - for the sake of variety.

I got this based on your rec.. and will be listening to it after I finish listening to the Carla Neggars that I am on now..

Want to be more about Deon Meyer? Watch this video interview on youtube: http://www.youtube.com/watch?v=L6_m9RiI5HU or dailymotion: http://www.dailymotion.com/video/xdsusz_rencontre-avec-deon-meyer_creation