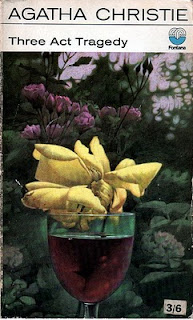 A dinner party at "Crow's Nest", the home of bachelor Sir Charles Cartwright at Loomouth, turns to tragedy when the Rev. Stephen Babbington takes a sip of his cocktail, convulses, and drops dead. Babbington's death is diagnosed as a seizure, and not suspicious. However not all the dinner guests are satisified, and at least one thinks it is murder.
Among the dinner party are Mr. Satterthwaite, an actress, an author, Sir Bartholomew Strange, Hermione Lytton Gore, and, making up the numbers at the table, Hercule Poirot. Nothing comes of the suspicions, analysis of the vestiges of liquid in the cocktail glass reveals nothing, and the book moves on.

Mr Satterthwaite is a great observer of people and he concludes two things about Sir Charles Cartwright - firstly he is always playing a part. Cartwright is by profession an actor, but in Satterthwaite's estimation, he is always seeking to play out roles, and take centre stage in real life. Secondly he sees that he is head over heels in love with Hermione Lytton Gore who is a good thirty years younger than him, and he is not sure that the young lady reciprocates.

The action moves to the Riviera. Mr Satterthwaite is in Monaco for the day and reads an announcement in the newspaper of the death of Sir Bartholomew Strange, in circumstances very similar to Babbington's. He meets Sir Charles Cartwright and learns that many of the Crow's Nest houseparty were also at Sir Bartholomew's dinner party. Hermione Lytton Gore has written requesting Sir Charles return to London as soon as he can. An inquest has already decided the death was due to nicotine poisoning.
Strolling in the gardens Sattertwaite comes across a familiar egg-shaped head, that of Hercule Poirot. Separately he and Satterthwaite decide to return to London by the next train.

THREE ACT TRAGEDY was also published as MURDER IN THREE ACTS. Indeed the story is laid out to reinforce that impression. There is a frontispiece that says

Assistant Directors
MR SATTERTHWAITE
MISS HERMIONE LYTTON GORE
Clothes by
AMBROSINE LTD
Illumination by
HERCULE POIROT
The story is broken into 3 acts.
In FIRST ACT -SUSPICION Babbington dies and there are suspicions about how he died.
SECOND ACT - CERTAINTY begins with the announcement of Sir Bartholomew Strange's death.
THIRD ACT - DISCOVERY brings Hercule Poirot into his own.

This is a story of coincidences,quite a number of false trails, and one in which both Mr Satterthwaite and Hercule Poirot play the matchmaker. Poirot is determined that the mystery will not defeat him. He is very aggrieved that he did not originally think Babbington was murdered.

This is the one book in which Satterthwaite collaborates with Poirot. He previously appeared in the stories which feature Mr. Harley Quin, in particular those collected in The Mysterious Mr. Quin (1930). The book gives us quite a detailed description of Mr Satterthwaite, as well as some further background about Hercule Poirot. (this is his 9th appearance in a novel - and there is no mention at all of Captain Hastings).

Reviews you may enjoy:

Kerrie - Thanks for this excellent review, as always : ). I liked Three Act Tragedy very much, and I think it's as much because of the neat tricks that Christie pulls as anything else. Of course, I like Mr. Satterthwaite, and thoroughly enjoy the scene where we learn something about his past. I think your review is very well-done, and I echo Martin's endorsement of the televised version with David Suchet.

Dear Madam, dear Sir,
Does anyone know why in the version “THREE ACT TRAGEDY” Sir Charles Cartright’s wife GLADYS MUGG living in an asylum is mentioned as “reason behind” but not in the version of “MURDER IN THREE ACTS” of the same case (legal aspects different in USA and in England?)? Thanks.
Alexander Minor, Thailand/ Germany, e-mail-address AlxMinor@gmx.de