When he lifts his arms to point the camera at me, the shirt bunches around the muscles of his biceps and his shoulders.'What's this about? Who sent you?''There's a simple message: back off.'The photograph has printed. He holds it up, shakes it dry and looks at it appraisingly.  'Not bad,' he says, turning the photo so I can see it. I look at myself, smiling at the camera, reflexively. 'This is for you,' he says, giving it to me. 'Keep it handy, so you can show the plastic surgeon what you used to look like.'


When a rugby star, who began life on the city streets, is murdered in the arms of a beautiful celebrity, it seems to be an open and shut case of a drug deal gone wrong. But Anna Markunas, legal researcher for the prime suspect's defence team, begins to uncover a far more sinister truth - a truth that could destroy everything and everyone she cares about most. And could, ultimately, destroy her.

Anna negotiates with Paul Malone QC  for her son Jamie, a legal graduate, to get a start in his chambers. Paul and Anna go back quite a way, as far as law school, and so he is really doing her a favour. Jamie has had some trouble with drugs and that makes it even more of a favour.
Anna quickly discovers that she has known the mother of the murder suspect for a number of years, in fact she has a memory of him as ten year old. So her relationship with the family begins to feel a bit personal. And then to complicate things Malone QC is brought in as the defence for Anna's client, and her son Jamie becomes part of the defence team. 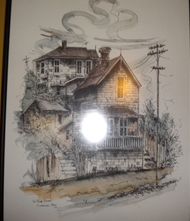 Plot complexity was one of the big problems I had with this book. Anna's own past is very complex, some sort of break down that means she has really only just resumed work. At times CUT & RUN felt like it had a cast of thousands and I really had trouble separating the characters out.
And then there was the multiplication of possible motives for the murder. The plot lacked incisiveness. Although I really wanted to know who did what and why, I felt at times I was wading through treacle. Amongst its redeeming features are some excellent descriptive passages, and tight passages of suspense. I did however fell the final solution came a bit out of left field.

In case you are wondering what the picture on the right is - I realised early in the book that Anna's house is set in the area this picture that I have on my wall above my desk depicts. I bought it in Auckland in 1977. How's that for coincidence?

CUT & RUN is Alix Bosco's debut novel and she has in 2010 published a second, SLAUGHTER FALLS.

You may like to check out what Crime Watch has to say.

Kerrie - Thanks for this review. I've read all sorts of review of this one, both positive and negative. Interesting...