Banned Books - How many have you read? 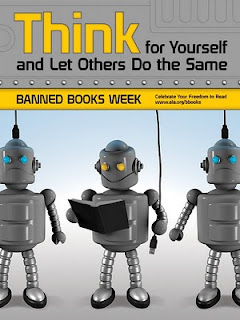 I was staggered when I was reading a post by a fellow Sunday Saloner to realise just how many books I have read that were at some stage, somewhere, banned.

How about you?
Try this list from Library Thing

Of course, one of the next steps from banning books was to actually burn them. That was one way to ensure their ideas couldn't spread. Or was it?

I thought much the same Kerrie, especially as I read quite a few of those for course work at my Catholic High School - amazing how quickly the world moves on!

Kerrie - It is fascinating how banning books doesn't at all mean that their ideas (or even the books themselves) are gone. I read several of those books, and it's interesting to me how they are now considered important pieces of literature...

In the past, almost all books that had a hint of controversy in them were banned, so most good books were. But I think this only increased sales numbers, though:) But I didn't know Harry Potter had been banned?! That's crazy! It's a childrens story!

Ten. I have some catching up to do.

Alexandra, I think Library Thing has included any book banned anywhere - might even have been banned by some right wing organisation, or in a tin pot country.

Interesting related article regarding banning of books from the BBC:
http://www.bbc.co.uk/news/magazine-11417672

I have only read ten from your list. What strikes me is that several of them are amazingly boring, considering that they have been banned.

I haven't read many of these books but I am still outraged at their banning. What about letting people read and think, for a novel idea?

I think Harry Potter's books were banned by some Southern states' schools and libraries in the U.S. Rightwingers were claiming they promoted "witchcraft" and Satanism. I kid you not. I had to hear about it in the press.

And also, not listed here but one which I remember well was the book on women's health, "Our Bodies, Ourselves." That was banned in some libraries in the U.S., too, and schools, probably the same ones that banned Harry Potter and a lot of the titles on the list posted here. (And, that book helped to save the life of someone I knew; she looked up symptoms of a life-threatening emergency and got herself to a hospital, just in time.)

I don't even get it. What harm can knowledge and thinking do?