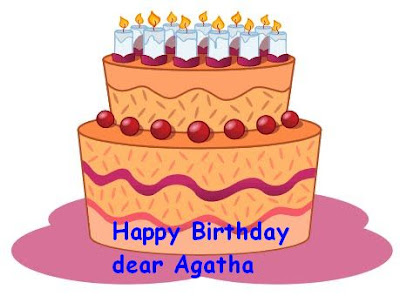 Delicious Death: Jane Asher's murderously rich chocolate cake
Noted cake-maker Asher says she was inspired by a passage in Christie's 50th novel, the Miss Marple tale A Murder is Announced, in which émigré housekeeper Mitzi bakes a chocolate cake for Dora Bunner's birthday tea.
The passage reads: "'It will be rich, rich, of a melting richness! And on top I will put the icing - chocolate icing - I make him so nice - and write on it Good Wishes. see also


Jane Asher describes it as
"an intense, forbidding dark Belgian chocolate centre which is lifted by the unexpected sharp zing of its brandy-soaked cherry and ginger filling. 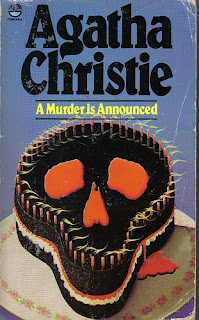 "The glorious assault on the senses doesn't end there: the cake is decorated with flecks of pure gold, sprinklings of crystallised rose and violet petals, and swirls of ganache piping."

Don't miss the post about the cake on Dying for Chocolate, and thanks to Janet for finding the book cover to the right.
Janet has included in her post not only the ingredients but the instructions as well.

Oh..... I can't describe how much I want to taste this cake. I might have to go to Greenway to get some!