Forgotten novel: THE END OF THE AFFAIR, Graham Greene 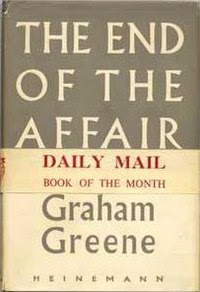 One of the questions that Dorte asked me recently was Some people do not regard crime fiction as 'real' literature. How would you defend the genre?


Graham Greene is one of those literary authors who also sometimes wrote mysteries and thrillers. THE END OF THE AFFAIR appears in my little green book of records in 1975. (As does ENGLAND MADE ME which wasn't a mystery).

Fantastic Fiction has this synopsis of THE END OF THE AFFAIR:
Maurice Bendrix's love affair with his friend's wife, Sarah, had begun in London during the Blitz. One day, inexplicably and without warning, Sarah had broken off the relationship. Two years later, driven by obsessive jealousy and grief, Bendrix sends Parkis, a private detective, to follow Sarah.

It is a novel that has stood the test of time well, with a remarkable list of re-publishings.
Wikipedia has lengthy biography of Greene, while Fantastic Fiction lists his novels with brief synopses.

Green collected the 1948 James Tait Black Memorial Prize for The Heart of the Matter, and in 1974 was tipped for the Nobel prize for literature, although he didn't get it. He was awarded the British Order of Merit in 1986.

I remember reading a Graham Greene novel at school, but it wasn't this one. The name escapes me right now though.

Great post, and great point!
As you may have noticed I am in the middle of a series of posts about Sherlock Holmes. I wrote a paper about him at the university, and Conan Doyle is another example of an acknowledged author who wrote crime fiction.