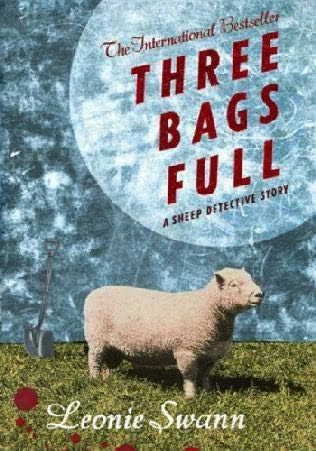 The premise of THREE BAGS FULL is simple. Glenkill shepherd George Glenn is found dead in the paddock, murdered, a heavy spade stuck through his middle. So we have a murder mystery.

But what isn't so simple is that the tale of the investigation is told from the point of view of his flock, a rag taggle collection of rare breeds put together by George for their wool and rarity. George has been working on their intelligence too, reading to them every day. The cleverest sheep in the flock is Miss Maple, and her enquiring mind won't let her leave the puzzle of George's death alone. She is assisted by some other notable characters such as Othello, a black Hebridean sheep with four horns, who was once in a circus, and Mopple, a very stout Merino ram who never forgets anything.

Miss Maple impatiently scraped grass and earth up with her hoof. 'But it happened,' she said. 'There must be an end to the story. If George had finished the detective story we would know how it ended. And I want to know. You want to know too, I know you're curious about it. You just don't want to bother your sheepy heads.'

'It's too much for us,' said Cordelia, embarrassed. 'So many human things that we can't understand. And there's no-one to explain words to us now.'

Seeing things from a sheep's point of view with half-understanding can certainly be extremely perplexing and I thought Swann did a very good job of passing this perplexity on to the reader. There were times I was really scratching my head trying to work out what on earth was happening. I think I got the events straight, and I certainly know who killed George.

There were glimmers of ANIMAL FARM in this book, but Swann's ability to sustain the satire is nowhere near as good as Orwell's. There are some interesting characters among the flock, and also among the townspeople. We are given lots of clues that enable us to piece together events that have occurred in the last seven years (the span of a sheep's memory).

But this is not a book that will suit the impatient reader. Other reviewers have commented on how slow it is in patches, and I don't think Leonie Swann manages to sustain it's allegorical nature all the way through.

How to categorise it? A cozy perhaps, but not particularly light. There are little puzzles that keep the grey cells working all the time, and it is easy to miss a clue or two, with the result that what is happening becomes totally incomprehensible. There's humour too - Melmoth the disappearing ram for example; the minister hearing confession behind the grill and then discovering it is actually Othello in the box; the Winter Lamb, a troublemaker with a yen to be involved.

I'm glad you reviewed this. I was curious about it but reluctant when I discovered the talking sheep aspect. Perhaps I'll try it.
I came from the Weekly Geeks link. I looked through all your reviews and though I've read quite a few, all of the Christie and Giles Blunt books,and some Indridason, Eriksson, Mankell,Nesbo,Vargas,Hill,Robotham, Chabon, and The White Tiger, I haven't reviewed any of them so couldn't leave any links. I review literary fiction and very few of those that I actually read. But I will certainly check out your blog in future when I'm in the mood for a crime or mystery fiction. Take care.

Thanks for the link, Kerrie. I've added yours to my own review. Much appreciated!

I started this a while ago and was finding it a bit slow. I had to return it to the library unfinished because someone else had requested it, but I will reborrow it again at some point in time.

I know I'm over a year late commenting on this blog. But I just have to mention (as I am in the middle of lambing) that the book is far more entertaining if you own sheep. I see many of those same behaviors and personalities in my own flock and I never found it slow, dull or boring because I was also interested in how the sheep would behave and comparing them to how my own sheep behave. I've re-read it now just to catch a few more sheepy nuances.