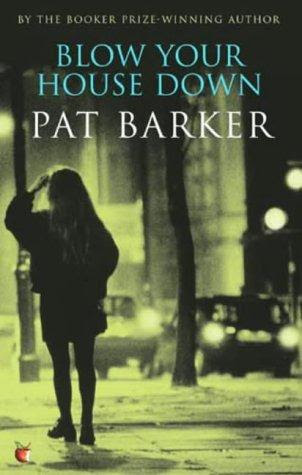 This week's contribution to Pattinase's Friday's Forgotten Books which is being hosted for just this week by George Kelley is BLOW YOUR HOUSE DOWN by Pat Barker, which I read in September 1986.
It was published in 1984.

A city and its people are in the grip of a killer who is roaming the northern city, singling out prostitutes. The face of his latest victim stares out from every newspaper and billboard, haunting the women who walk the streets. But life and work go on. Brenda, with three children, can't afford to give up while Audrey, now in her forties, desperately goes on 'working the cars'. And then, when another women is savagely murdered, Jean, her lover, takes desperate measures.

Pat Barker has been a popular author since 1982, and indeed I reviewed an audio version of DOUBLE VISION only recently.  BLOW YOUR HOUSE DOWN was her second novel.

Pat Barker is one of those cross-genre authors: crime fiction with literary merit.

Kerrie - Thanks for this; I think you made an excellent choice for Forgotten Books.

Perhaps I should put her on my list. I have read one or two of her literary novels, and I was quite impressed by her ability to create memorable characters.

I read Pat Barker's REGENERATION and came away unimpressed. But, after reading your review, I think I'll Pat Barker's work a second chance.

A good stark cover, and a writer new to me. Thanks.

George, I read her WWI trilogy (REGENERATION, THE EYE IN THE DOOR and THE GHOST ROAD) and think she's worth another chance.