The night children, the runaways, come to the city by the hundreds, filled with hope and fear and promise. They gather during the day in free spaces: bus and train stations, libraries and museums, art galleries, and cheap eating places. And that's where Joseph Swann, magician, illusionist and conjuror, master of disguises, observes and selects them for his Seven Wonders project. He has a particular type of girl in mind. Each will be a guest in a room in his house until their great moment.

The year is 2008, the city is Philadelphia, referred to once in PLAY DEAD as Killadelphia. When Joseph Swann was born his father, the Great Cygne, momentarily thought he had silver eyes, the mark of the devil. The Great Cygne was a master magician, and each of girls whom Joseph befriends will be matched to one of his father's most remarkable illusions. Joseph's desire for approval, recognition, and the admiration of others stems from the way his father treated him.

The body of the first of Joseph's victims, Caitlin O'Riordan, is discovered in May 2008, carefully posed in a glass display case. In August 2008, by which time the O'Riordan case is already regarded as a "cold case", the body of a second victim is discovered. The investigation becomes the first handled by homicide detectives Kevin Byrne and Jessica Baldano after their transfer to the Special Investigations Unit. Even as multi-stranded investigations into the bodies already discovered begin, the serial killings continue, and the reader is "introduced" to new potential victims.

PLAY DEAD is the first novel I have read where I can recall seeing the Aristotelian Incline so obviously utilised. After the prologue which sets the scene, the novel implements a three act structure. In the final part, Death Clock, the action and tension ratchet up as Byrne and Baldano race against the clock to beat Swann to his horrifying climax. 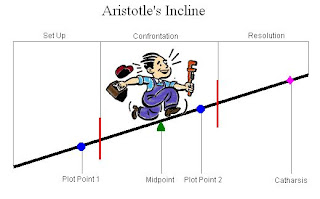 This is my most satisfying read so far this year. Meticulously plotted, full of puzzles, it is bound together by the heightening tension. I would like to hear what a Philadelphian reader thinks of it. It is one thing to read a book as scary as this one from an outsider's point of view, quite another to read it as an "insider".

There is a lot of back story throughout PLAY DEAD, and in places it makes the main story unfold just that bit more slowly. However by the final section I had come to appreciate why it was there. The only jarring note for me was one of the final chapters that, Poirot-like, "revealed all", and I just wish Montanari had found another way to do it.

Richard Montanari has a website at http://www.richardmontanari.com. There you can watch an exclusive 8-minute interview with Richard about PLAY DEAD (Badlands), why his books are set in Philadelphia, what Jessica Balzano means to him, and what's coming next.
Verlagsgruppe Lubbe has announced June 16, 2009 as the publication date of SEPTAGON, the German-language edition of BADLANDS.

Sounds good! Do you think that this is a series that needs to be read in order?

Well, I haven't Marg. I think Bernadette has read the first couple and can recommend them

I've requested the first one from the library so we will see how it goes.