I didn't need any more books! 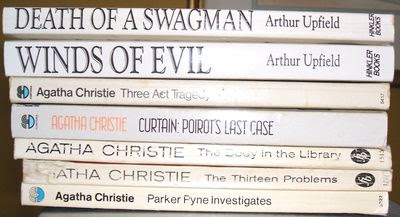 Yesterday we went out to the Meadows Easter Fair and discovered heaven in the form of a number of second hand book tables. You can see my purchases on the right.

I bought the Arthur Upfields at Elliot Books in the mainstreet of Port Elliot. It was recommended to me by a work colleague and, although my parents live down there, I had never been into the store before. Well worth visiting often! He gave me a discount for buying more than one book.

Anyway I bought the Upfields because of 3 Acts of Murder coming to ABC TV soon.
From the website:
In 1929 Arthur Upfield, Australia's premier crime writer, plotted the perfect murder for his novel The Sands of Windee. Meanwhile, one of his friends, stockman Snowy Rowles, put the scheme into deadly effect, even before the book was published. The result was one of Australia's most sensational murder trials of the 1930s.
Well, as you can see, I didn't manage to buy SANDS OF WINDEE so perhaps I'll have to pay another visit soon.

Anyway I decided to spend today moving Mount TBR from the various locations described in another post two weeks ago, to its own dedicated bookshelf.

Bless you Kerrie, you've made me feel so much better about my TBR piles! It was great to see on your poll that a substantial stash is not unique to me, in fact, mine is a minor foothill compared to some.