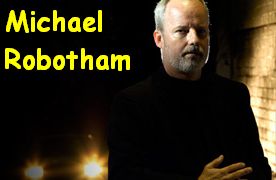 This morning I've had breakfast with one of my very favourite authors, Michael Robotham.

He and Malla Nunn have been touring Australia for GET READING AUSTRALIA since the middle of last week, and just now they are in South Australia. On Friday they go on to Hobart, and then they'll have done 13 places in 10 days.

Michael began this touring madness in the name of adult literacy back in 2008 when he became the Books Alive ambassador, and undertook a similarly gruelling schedule.

Michael's next novel, THE WRECKAGE, to be published in May 2011, will see the return of retired detective Vincent Ruiz and introduce a new character, crusading journalist Luca Terracini.

Michael and I were joined at breakfast by his travelling companion on this tour Malla Nunn.  Her debut novel, A Beautiful Place to Die, was published to international acclaim, winning the 2009 Sisters in Crime Davitt Award for Best Adult Crime Novel by an Australian female author and, in 2010, was shortlisted for an Edgar Award (USA). Her latest book in the Detective Sergeant Emmanuel Cooper series, Let The Dead Lie, has just been released.

I was embarrassed to admit that I haven't yet read A BEAUTIFUL PLACE TO DIE, but I do have a library copy next to my bed, and I have promoted it ot the status of TBRN (to be read next).


The breakfast conversation was great: ranging in topics from the worst books I have ever read and reviewed on my blog, to Adelaide's claim to be a crime capital, to anecdotes about plane flights, to television shows, to discussion lists, to whether crime fiction is literature.


What a great way to begin the day!

So what do crime fiction writers and readers eat for breakfast?
Rather surprisingly perhaps: Bircher muesli and coffee.

Kerrie - Thanks for sharing such a great experience! I'm so glad it went well. : -)

I hope you enjoy A BEAUTIFUL PLACE TO DIE

you've hit one of the nails on the head Bernadette