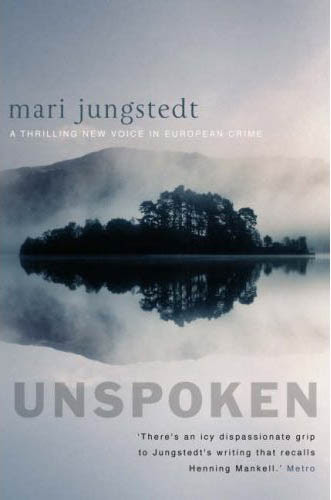 Publishers Blurb:
It is winter on Gotland, and fourteen-year-old Fanny is missing. She had no friends to speak of other than the horses she took care of at the local racing stable, and seems to have been an unhappy and isolated teenager, the daughter of an absent Jamaican musician and an instable Swedish mother. Is her disappearance somehow connected to the recent brutal murder of alcoholic photographer Henry Dahlström, who had won a large sum of money at the racetrack right before his death? Inspector Anders Knutas and his team investigate under pressure from the media.

#2 in Jungstedt's Anders Knutas series is at once a Swedish police procedural set on the island of Gotland, as was the first in the series UNSEEN, and at the same time an exploration of how little people often know about each other, even in situations when they should. It is a book I've had on my mental list for some time.

UNSPOKEN is a clever interweaving of three stories: firstly the disappearance of Henry Dahlstrom whose friends know almost nothing about him, and whose wife and daughter have long rejected.  As is often the case it seems in modern murder mysteries Dahlstrom has sources of income that those closest to him knew nothing about.
Fanny Jannsom was not yet fifteen and yet already her mother was assuming that she could be left alone overnight or even for weekends. Again, here is a person with no real friends, and with a secret life well hidden from view. but it is a life that Fanny really wanted to be rescued from.

The third element was one that I had not expected. Reporter Johan Berg had a significant role in UNSEEN, and he became entangled with Emma, a friend of one of the victims. The continuing relationship between the two provides an interesting backdrop to the police investigation in UNSPOKEN, while Johan is constantly prompting Knutas for results.

Jungstedt's is a lighter, almost uncomplicated style when you compare it to other Swedish writers like Henning Mankell and Nesbo, whose novels seem much darker. That isn't to say that Jungstedt isn't dealing with dark situations. I am tempted to compare it with Helene Tursten's particularly in the treatment of the domestic life of the central police character.

Other Reviews to check:
Mari Jungstedt (1952 - ) is a Swedish journalist and popular crime fiction author.

Jungstedt worked as a reporter on Swedish national public radio and television, and is still an occasional presenter on TV4's daily talk show Förkväll.

Her first three novels are set on the island of Gotland and feature Detective Superintendant Anders Knutas and the journalist Johan Berg. Two of her novels were filmed for Swedish TV, and her work has been translated into English by Tiina Nunnally.

Mari Jungstedt lives in Nacka, near Stockholm. Her husband comes from Visby, Gotland, and during the summer they stay on Gotland.

Kerrie - Fine review, as ever. You know, you make a really interesting point about secret lives that people don't know about, even when they are family members, etc.. I think I'm going to think about a blog post on that one...

Nice review, Kerrie. Glad you are enjoying this series.

I agree that her works are ´lighter´, but at least she has learned to put a little more crime work into them than in her debut which I found very slim indeed.