Are novels designed to be read, not heard? 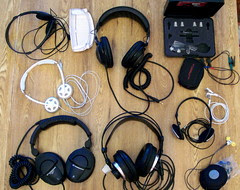 I came to this article in The Guardian in which Mark Lawson says The audiobook boom risks infantilising literature via Meg Gardner's blog posting titled Audiobooks - a modern form of thumb sucking.

My response to Meg's posting (which has provoked a great deal of discussion via comments) was:
I listen to audio books in the car to and from work. I HATE the abridged ones though, and avoid them as much as I can.
Another element comes in though when you are listening to the book through the reader’s voice, and one or two have turned me off totally. On the other hand sometimes you end up getting through a book that might otherwise have been a struggle.
When it comes to reviewing (and I always review all the books I read whether with the eyes or with the ears) audio books raise another problem. You can’t turn back the pages easily to check something. You may not even get character names correct because the narrator doesn’t spell them for you, and minor details disappear into memory ether. If the narrator has won you over, then you may give the book a higher rating than if you had actually read it in a print version.

One of the most interesting experiences is listening to the author read his own books.
Simon Brett does that with the Fethering series.

I invite you to leave a comment here too, and to take this week's poll.
The poll asks Do you ever listen to a novel?
You can choose multiple options
You might like to make a comment to explain the vote you chose.

Audio on my blog:

Have you noticed that that my blog has an audio feature? - look for the Odiogo link just under the title of each posting.
Have you tried listening to them?
If I forget to put full stops in then the sentences tend to run together, which can be annoying.
The voice is also a bit mechanised and has some very strange pronunciations.
You can actually subscribe to my blog as a podcast download if you want to. The podcast site lists the last 30 posts I think, but they are all available if you click on the link in a particular blog post.

I have no idea of how many people are subscribed. If you are actually a subscriber you might like to come into my blog and comment too, particularly if you are listening to, rather than reading, this post.

I originally added this feature to accommodate those who come to my blog who are visually impaired. (Actually I have no idea of how to remove it either, but it seems a good widget to offer).

I do agree that tapes are more prone to wear and tear but have found that people with reduced vision find them easier to use as most home cd players lose the place you were up to when you stop it - unlike in a car where the place is held.

I must go and read the article now :).

I don't think I've ever managed to listen to an audio version of a novel. I like to get right back to the source and negotiate with printed pages.
I think it's to do with introducing another interpretation of the text between reader and writer. I don't like to think of any, even subtle interpretations coming between us.
Most of my own novels are available as audiobooks, but I have not listened to them, either, as I wouldn't like a voice to get inside my head which conflicts with the voice on the page.
But, of course, for people with sight problems or time problems, the audiobook must be a boon.

Karen that is an interesting point. I recently listedned to a novel on CD that had a new track every minute. My plyare hasn't go the ability for you to choose which track you want so taking the CD out at track 85 and then having to get back to it was very exasperating.
I can see the advatnages of tapes.

John, thanks for dropping in. Good luck with your novels. I listened to a Val McDermid where Robson green was the reader. As you know he plays Tony Hill in the TV series, so hearing him read the whole text was rather disconcerting

I've tried it exactly 3 times, two of those I slept before the first chapter even finished.. The third book was short since it was only 2 hours long and I was busy with my hands at the time .. but still I would enjoy a book to read better since I've discovered I'm a visual person.. so to consentrate better on an audio I should have the printed book to read while I listen..

If you're thinking of getting an mp3 player to listen to audio books you really need to do some serious research. Most of these devices don't have an adequate bookmark function, as they're primarily designed to play music.
With a book you need a quick and easy way to find your way back to the place you stopped reading.
Even the ipod doesn't have an adequate bookmarking system.

Listening to a recorded book hasn't worked well for me - my mind wanders because I can read faster than someone can read a book to me - but it works very well for many readers and is, of course, essential for those who need them to read books. If the alleged "boom" makes more books available for those people, all the better.

In general new technologies don't replace old ones; they just add more options, and for books that's all good.

I have listened to a couple of YA novels and not been thrilled. I am about to try a mystery/thriller and see how it goes, probably Le Carre, something I've already read.

I do listen to sci fi and fantasy short story podcasts and those can be quite fun.

I like audio books. I tend to restrict them to the times when I am doing something else (walking, housework, driving etc) but only because I can read faster than someone can read out loud to me.

I listen via my iPod which has a perfectly fine book marking function (i.e. you can go back to the spot where you finished last time at a single click).

People have different learning styles and preferences for getting information into their heads and I think folks like Mr Lawson are being a tad snobbish to say that there's only one way to skin a cat.

If the audio book is going to be my only way of 'reading' a book then I won't read an abridged version. I do have a couple of abridged audio books but only because I've got the print book and because there isn't an unabridged version available (e.g. Hitchhiker's Guide to the Galaxy is only available in a slightly abridged format).

The good readers/narrators don't interpret the work - that's still up to you.

Stephen Fry reading the Harry Potter books is just about as close to the most perfect entertainment I have ever found.

I will always prefer text reading, but I do listen to audio when on road trips. I prefer very fast-paced books or humor. Generally I speed read and skip boring parts of books so audio can be a bit slow for me. The reader makes a difference also. In the car, there is a lot of road noise. If I can't hear the book well, I won't be able to listen to it.

For short roadtrips, I have taken to listening to short stories. There are a number of excellent sites (most of them a fantasy or sci/fi) with short fiction. The short stories work well because of the driving distractions and also because if I do lose my place, I can either skip the whole story or get to where I was rather quickly (someone else mentioned the whole bookmark problem with an MP3 player.)

My father has problems with his eyes--audio books have been very good to him. The only problem is that he loves non-fiction and there are not enough non-fiction audios out there.

The other problem is the expense. Audio books are 3 and 5 times more expensive than a hardback (some are as much as 75 dollars). Almost all the books I have listened to came from the library. The books I've bought for dad have all been used.